Simple things can make me happy….today it was a toilet that brought me joy.

An RV toilet does not have a p-trap (at least mine doesn’t)…the hole goes straight into the tank of disgustingness.  So to give you some separation from the nastiness there is a foot activated flush valve.  You know how in the movies the evil villain brings the hero into his glamorous lair to divulge his secret plan right before he pushes the big red button which drops the floor out from underneath our hero’s feet so he falls into the pit of something really gross and/or deadly?  I won’t completely spell this analogy out for you…but you are the villain and that foot activate flush valve is the big red button.  Dang, that analogy makes for a crappy hero doesn’t it?

END_OF_DOCUMENT_TOKEN_TO_BE_REPLACED

While we stayed with the Millers we parked Ava in a vacant lot owned by their neighbors.  We considered taking it to their house but it would have been a challenge to park and this vacant lot was a breeze.  But the area seemed slightly sketchy.  I thought about moving the bikes inside the trailer but figured that 3 cable locks would be enough.  Before we went to visit my niece in Birmingham we stopped by the rig to get some stuff.  I could see something hanging loosely at the back of the trailer, my heart sank, and when I rounded the back of the camper….all 4 bikes were there (Brielle’s gets stored in the basement).  However, someone had cut the ropes and taken the bungees off…so there was at least an attempted theft.  Oh I was fuming mad that someone would do that…I just don’t understand the mentality of taking other people’s stuff.  But I’ve had a pretty nice life so maybe I just don’t get it.  We moved the bikes inside the rig so they would hopefully be more secure.  By the way, 4 out of our 5 bikes were purchased on Craigslist…these are used bikes…no titanium frames, kevlar belts, plutonium filled shocks, etc…just plain ol used bikes.

END_OF_DOCUMENT_TOKEN_TO_BE_REPLACED

We’re still total newbies at this but here are a few observations about a life on the move.

END_OF_DOCUMENT_TOKEN_TO_BE_REPLACED

After several days at Fort Davis we decided to head east.  So we got around in the morning (takes us forever) but were on schedule to hit the road at 10:00.  One of the last steps is raising the front end of the fifth wheel using the powered landing gear so we can hitch up.  All was going fine until I heard the motor start struggling and then the clutch started clicking and we weren’t going higher.  We were still a few inches from being high enough to hitch up.  So I started investigating and realized that I had sheered a pin off the shaft of the front left landing gear.  So the right leg was trying to do all the work and started getting the trailer cattywompus and bind up the landing gear.  I started thinking “well, at least this is a nice place to stay a few more days”…but at the same time I got into McGyver mode.

I started looking for something I could use as a pin.  Stubby screwdriver?  Nope, didn’t fit.  Some wire?  Doesn’t seem strong enough.  I had some wood screws so I stuck one in and it fid dit!!  I wrapped some electrical tape around it to hold in in place and hit the motor button.  Click click click click.  Crud!!  Then I remembered the guy we bought the trailer from said “don’t loose this bar/crank…its for manually operating the landing gear.  But I sure hope you never have to use it!”  Well, it was my day to use it.  I started cranking…it was HAAAAARD.  And its geared so low you can’t even tell its moving.  But after awhile it started getting easier…”maybe I’d gotten past the binding point!” I thought.  So I hit the button and the sweet sound of a happy motor hummed along as it lifted the trailer.  WHEW!!  By the time the gear was up my screw had been completely chewed up and spit out in 3 pieces. So much for leaving at 10:00…but, we don’t have any schedule or reservations so we just go with the flow!  Glenn came over to say goodbye and wish us well.

We swung by an Ace hardware on the way out of town and I got a couple bolts to use for a more permanent solution.  I installed the new bolt while we filled our guts with lunch at a rest stop on I-10. I think the landing gear is back in business.

That is, I got no crap on me, Ava or the ground during my first solo dump of the tanks.  Movies like RV with Robin Williams can freak a guy out about all the bad things that can happen when emptying your tanks. 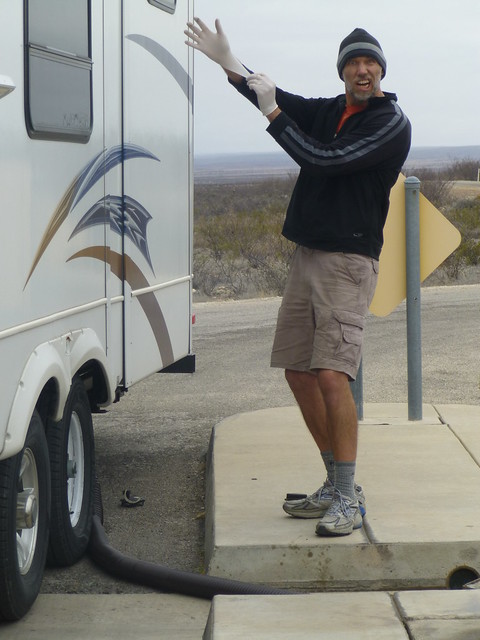 So, as an engineer I made sure I understood the system as a whole.  I read a lot of instructions on proper technique and how to avoid contamination of everything but the sewer hose.  And I watched an inordinate number of Youtube videos on RV black tank mishaps and how to avoid them.  My biggest concern was that there would be pressure from a line of people waiting to use the dump station.  But when you are at a state park in the New Mexican desert, in January, on a Tuesday you pretty much have the dump station to yourself.

After several “dates” our truck CELO (not his official name yet) and our fifth wheel Ava finally got hitched. 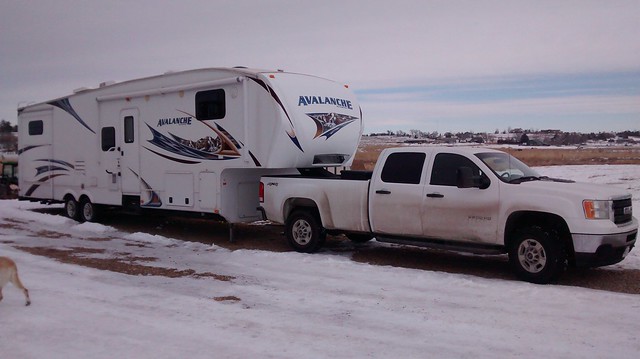 I borrowed the truck from the dealership since the DPF won’t get here until Tuesday.  My good buddy Eric (this guy and his family have been truly amazing) helped me finish the install of the hitch and we hooked ’em up.  We took the pair out for a test spin and Eric, who has his CDL and lots of 5er experience, coached me through some turns, adjusting the brakes and into our church parking lot for some practice backing up.  I think it went pretty good!

Sort of a trivial step in the process but finally got around to getting Ava (our fifth wheel) officially titled in Colorado in our names!  I strolled the few block downtown to the DMV and was pleasantly surprised that there were exactly zero persons in front of me in line!  Armed with the bill of sale, the title from the seller and a completed VIN verification form I walked out with a license plate, registration, title (actually this will get mailed to my house later), and my bank account further diminished.  I should mention that my first attempt to do this was thwarted by the lack of the VIN verification form.  When a vehicle (or at least a trailer) was previously titled out of state you have to have a qualified person do a VIN verification….that is, they verify that the VIN on the vehicle matches that on the title.  In Colorado this can be done at emissions testing stations or by a dealership.  I used the latter and was able to get them to go to the trailer instead of taking the trailer to them.

Whats the deal with couches these days?  The arm to butt space ratio is WAY out of wack.  We found this out when our family grew to 5 members and our tiny loveseat in our tiny TV room didn’t have enough room for 5 butts…but only because the arms of the loveseat took up at least one, if not two, butts worth of space.  We figured out that the Ikea Karlstad couch (plus the chaise for lounge-ability) would just fit in our room and had enough space for all 5 of us.  The couch has arms appropriately sized for an average human arm, which is the most frequent use case for couches in our house.  I watched Craigslist like a hawk and ended up scoring the EXACT unit we wanted, almost brand new (was in a family’s vacation home) for $200 and located less than a mile from our house.  Well, it seems that the poofy, luxury couches that come in most RVs are designed for Popeye’s big arms and tiny butt just like the sticks and bricks counterparts.

END_OF_DOCUMENT_TOKEN_TO_BE_REPLACED

Once again my good buddy Eric lends a huge helping hand with winterizing the trailer.  Its mid October here in CO and the nights are getting chilly.  It won’t be long until we start dropping below the freezing mark.  So we gave the grey and black tanks a really good cleaning, drained the fresh water tank and drained the water lines.  We also pulled the plug on the water heater.  You’d think that draining the water lines would do the trick but we hooked the compressor up to the water inlet and, whoa nelly, there was still a LOT of water in the lines.  But after awhile we were just getting air out of all the fixtures.  I then poured a little antifreeze down each of the drains.  I think I’m going to order some Fresh Cab to deter mice from moving into our rolling castle.  I also saw a pretty clever mouse trap you can build with a 5 gallon bucket….maybe I’ll try that too.

I had really wished that we could get a trip under our belts, but its not going to happen.  There are so many benefits to getting some time in the trailer before rolling out long term….but we don’t want to do it the easy way!

We had found a good deal on a 5th wheel that seemed to be just what we wanted. We drove 6 hours (RT) one day to check it out and make sure it was The One. We made an SMS-based deal with the sellers.  But we had no clue what the rest of the process looked like.  Steph and I have bought several different houses.  Like real estate this was a pretty big purchase and it will be our home….but it has wheels so its more like a vehicle….right?  Steph and I have bought several cars, always used, twice with salvage titles, and always with cash.  But almost none of that experience translated to buying this fifth wheel.  What to do? END_OF_DOCUMENT_TOKEN_TO_BE_REPLACED