We got Ava packed up for the last time and hit the road at 9:15 for the very familiar drive from Phillipsburg to Longmont.  There was a detour that cost us about 30 minutes, some poorly coordinated bathroom breaks, lunch break and a stop at the Welcome to Colorful Colorado sign for a picture.  I spent a lot of the drive time exercising my memories of the trip and tried to avoid thinking about the task of moving back into our house. 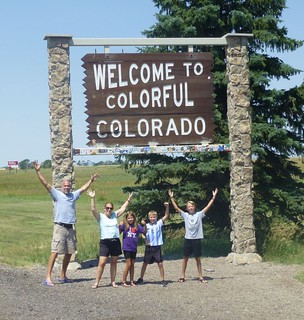 END_OF_DOCUMENT_TOKEN_TO_BE_REPLACED

Ever since I met Steph we’ve made trips to Phillipsburg KS at least once a year to see her family that is there.  So I’ve been there at least 19 times and Steph at least twice as many times as that.  So Phillipsburg almost feels like home.  We planned to spend our last few days of this adventure visiting the little town that feels so familiar.  Phillipsburg will be our exclamation point of this amazing trip.  It was about a 6 hour drive from Kansas City to Phillipsburg and we made the trip without issue.  We are staying at the Cottonwood Inn RV park on the east edge of town.  We checked in, picked a spot and set Ava up for the last time on this journey.  The kids and I put on our swim suits and headed straight for the pool to cool off…it felt great!  After dinner Steph’s cousin Tiff and her family stopped by to visit for awhile after they did chores.  Dacen and Michael played with Legos while Brielle and Chloe played with Barbies.

END_OF_DOCUMENT_TOKEN_TO_BE_REPLACED

We had one of the smoothest moving day mornings of our trip as we packed everything up at Cahokia RV Parque.  Without even trying we were on the road by 9:30 on our way to Kansas City.  As we pulled out and said good bye to our campsite and began our last Thursday of this trip Brielle said, “bummer, we never did get to try those donuts.”  Every time we drove into St Louis we passed this little donut shop called DJs Donuts.  We have stopped for donuts on moving day twice before and both times were more like lunch time donuts: once in Panama City and another time in Philadelphia.  So I figured we needed to have breakfast donuts for a change and I pulled Ava and the Beast into DJs to get some fuel for our bellies. 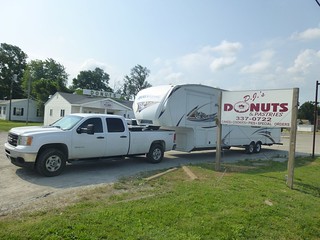 END_OF_DOCUMENT_TOKEN_TO_BE_REPLACED

One could spend a long time in St. Louis before boredom set in.  We have one day left in this city and so decided to check out a sculpture and splash park in downtown called City Garden.  Dacen was in a funk and really didn’t want to do anything but once we got to the park and he saw the splash area he cheered right up and had a lot of fun with the other two.  It was super hot but we stayed cool in the shade of the trees and/or splashing in the pools and fountains.  After a picnic lunch we explored all of the art pieces on display in the park.  They were all fun and unique so we posed and took pictures with most of them. 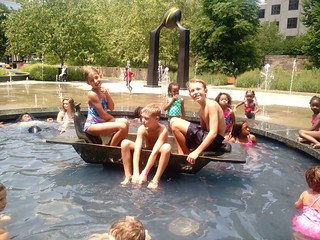 END_OF_DOCUMENT_TOKEN_TO_BE_REPLACED

My cousin had recommended City Museum, Steph had heard great things about City Museum and when our neighbor back in Kentucky heard we were going to St. Louis he said, “oh…you HAVE to go to City Museum!”  And so we had no choice…we would have to endure another museum.  We have been to so many museums and we have enjoyed almost all of them and always learned something. Would we enjoy this one and would we learn anything? Yes and yes! 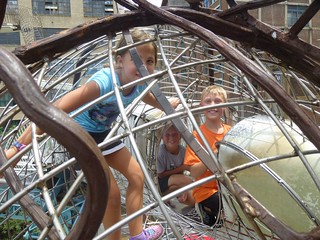 END_OF_DOCUMENT_TOKEN_TO_BE_REPLACED

Today we headed across the Mississippi river to the St Louis zoo which is free.  Yeah, FREE!  They do charge for parking, however I am not much of a zoo guy so I dropped the fam off at the entrance then drove about a mile further into the Forest Park where there were some covered pavilions and I was able to get some work done.  They saw elephants, apes, hippos, ROUSs (Princess Bride ref)  and despite the heat they also saw polar bears and penguins. 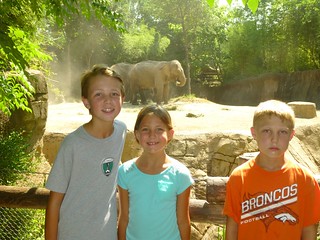 END_OF_DOCUMENT_TOKEN_TO_BE_REPLACED

Yesterday we moved from Memphis to St Louis…actually, we’re on the east side of the Mississippi in Cahokia, IL.  The campground has a pool and the heat makes that a very refreshing and popular place for the kiddos.

Today is Father’s day and the kids showered me with gifts.  Brielle gave me some thumb tacks and fishing lures accompanied by a music themed, Memphis style card she made.  Caden gave me a half cup of coffee and his usual busy and super creative card.  The half cup of coffee originated in NYC where he saw a half coffee mug that said “NYC is so expensive I can only afford half a cup”.  He really wanted to buy it for me but I told him it was too expensive for the utility it provided.  Thus was born his idea to convert one of our existing mugs to a half cup with duct tape covering half of the opening and a note that said ” my dad is so cheap he wouldn’t even let me buy him a half of a mug…so I’m gonna let him put some of his cheap instant coffee in this mug with duct tape over half the top”.  Dacen made me a really cool bass guitar shaped card and a Gibson guitar pick threaded through the paper strings.  I also got a cool 5th wheel shaped picture frame that they kept hidden from me in this tiny house since back in Virginia.  The kids all gave me lots of hugs and kisses and told me again how much they have enjoyed our trip…that’s the best gift of all!! 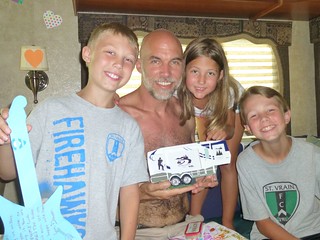 END_OF_DOCUMENT_TOKEN_TO_BE_REPLACED

BEWARE:  What follows is a brain dump from my confused head and swirling emotions…

While moving days are getting much easier due to our familiarity with the exercise, for me it is getting harder emotionally.  We are now at the point where we have our last several stops laid out.  We know how many more areas we will visit and how many more moving days we have until we are back home in Longmont.  The open road and endless possibilities are drawing to a close in this chapter.  We are close to completing the circle.  And while I am excited to get back to our friends and family back home I do not want this adventure to be over.  I especially don’t want to forget all of the mental images and videos filling my head from the trip.  I have perfect clarity on every step of our journey and I don’t want to lose that.  It seems like it all went so fast, how can we be almost done?  I vividly remember being on top of Raton Pass leaving Colorado on day number 1 and thinking, “we won’t be in Colorado for 5 or 6 months….longer than I have ever been away from Colorado.”

END_OF_DOCUMENT_TOKEN_TO_BE_REPLACED

Have you been hurt in an accident?  Don’t take the law into your own hands, call Peabody, Gibson and Nelson today!  Sorry, that title just sounds like the name of a law firm.  But no law firms are in our story today just hotels, guitars and friends.  Dacen was really interested in the factory tour at Gibson Guitars and Brielle wanted to watch the famous duck march at the Peabody Hotel.  So we split into two groups:  the boys did guitars and the girls did ducks.  Both places were withing a few blocks of each other so Steph dropped us guys off then found parking before taking Brielle to the hotel. 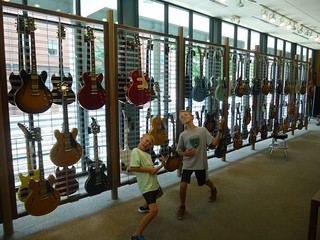 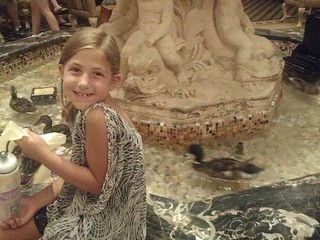 END_OF_DOCUMENT_TOKEN_TO_BE_REPLACED

Our adventure today will take us to Mud Island.  With our picnic lunch packed we crossed the Mississippi from our Arkansas campground to Tennessee (about a 10-15 minute drive) to this little island in the river.  You have to pay $6 to park for the day.  The lot only had 3 or 4 other cars in it so there was no trouble finding a spot.  What were we doing here?  Why does one venture onto Mud Island?  Because as you watch a portion of the Mighty Mississippi flow by the island you can also enjoy viewing and playing in the entire length of the Mini Mississippi:  a 2000 foot long exact scale model of the Mississippi river!  You can read all the stats and detailed info here. 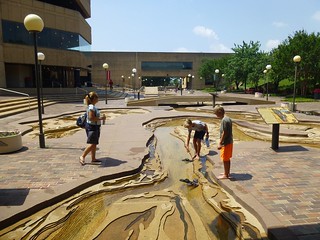