I don’t really like big cities what with traffic, so I wasn’t super excited about going to Philadelphia and then New York so I was surprised when it was pretty fun. We saw the liberty Bell, Ben Franklin’s house, printing press, and a museum about him. I liked the museum because you got to do stuff. We also got a lot of the trading cards. Independence Hall was really cool. There we learned, I learned, that Philadelphia was once the nation’s Capitol. Kind of a bad turn of events for them when Washington DC came along and then the capitol of Pennsylvania was taken. Poor guys. At least they still have their Cheese Steaks. Oh yeah, Cheese steak! Yum! Those were really good even though it’s pretty much cheese, bread, and steak, although, the one I shared with Papa (I actually got three quarters since everyone gave him some) had mushrooms and peppers mmmmmmm. 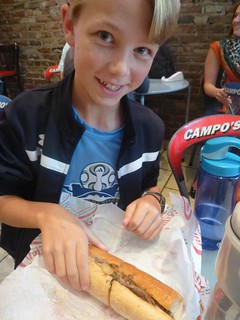 Changing the subject, I think if you work in a big city and you lived outside of it, you would spend more money going to and from work than you even earned that day because of toll roads.

See you in The Big Apple,

One thought on “At Least They Still Have Their Cheese Steak”