Fort Sumter is in Charleston South Carolina and the first shot of the Civil War was shot there. Some Yankees came down and took Sumter in the night and the next morning raised a huge flag which the townspeople took as a sign of aggression. (I really don’t see what’s aggressive about that ;-)) After laying siege for a couple months the Confederates got bored and threatened to attack. They sent a shell which exploded over the parade ground and even though it didn’t do any damage it acted as a signal shot for the other forts surrounding it. After a while the Union soldiers realized that they didn’t have the manpower to shoot back. They raised a white flag and did a 100 cannon salute, however in the salute Private Daniel Hough had his arm torn off during a misfired cannon shot which killed him instantly making him the first casualty of the war even though it was an accident. Poor guy, how embarrassing.

We also visited Boone Hall which is a plantation. The crops it grew were cotton, indigo, pecans, and bricks which is pretty awesome because it’s kinda hard to grow a brick in my opinion. They had a bunch of slaves. About 200 who lived on slave street which is a row of houses. Along with that was an allee of live oaks which is a dirt road with the oaks on both sides. This one was three quarters of a mile long and on the end was a magnificent house! It was huge and white and I’ll save words if I just show you so here it is: 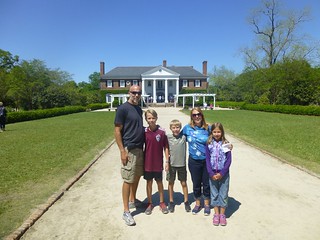 We were lucky and got to tour the house, slave street, the rest of the plantation (in a truck thing), and we listened to Mrs. Veronica talk about the Gullah. I liked South Carolina and I can’t wait for North Carolina and seeing the Staats and Deutschbeins.