New Orleans has so many fun things to do! Music playing, restaurants to go to and yummy food. We just love New Orleans!

New Orleans is the longest place we’ve stayed already. But we might stay longer somewhere else.

The Dragon Masters are so cool! They were dancers that were also funny. They did the leap of death over 9 people! Don’t worry nobody died yet. And everybody was fine. 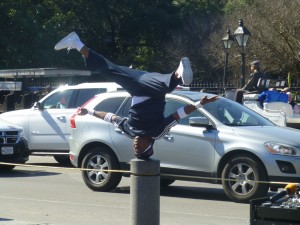 The Parade!! At the parade I had for lunch smoked sausage. It was like a hotdog but bigger. It was so good. We also watched a big parade. It was so cool and pretty! The feathers on the costumes were kind of colorful and poofy. The feathers poofed out and took up so much room. The girls were giving out roses. 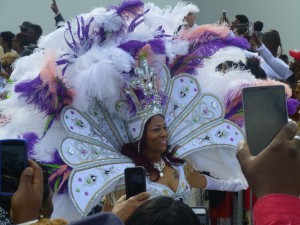 After that we played a little at the park. We took pictures with the statues. 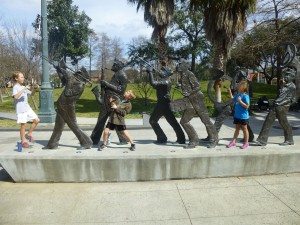 After that we went and looked at the old houses. We found a few lizards that we tried to catch but they kept running away and jumping away. I was too scared because they kept jumping a lot. The houses were so so pretty. There were trees that were so smooth I thought they were fake like plastic.

And look at my chocolate mustache here! This was Valentine’s Day and we had pancakes with chocolate chips on top! 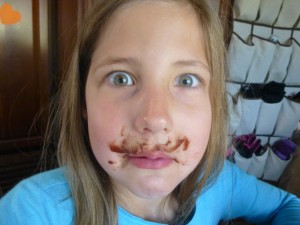 The WWII museum was kind of scary because of all the blood back in those days. We got these dog tags that let us download a person’s story at different stations along the way. Mine was “Pappy” Boyington. Next, we went in the submarine and we got to control some of the stuff. (We were each given a station to man.) There was a big huge bomb that scared me so I was too scared to do my part. I was doing the looking out for the boats (one of the periscopes). We got to keep these cards that had a name of a real WWII guy on it. Mine didn’t survive, but mom’s did survive, so mom let me have hers. (Actually my guy also was one of the narrators on the video we watched after the experience.)

When we went to the restaurant after that it was raining and I said whatever we do I’m going to put my hood on!

Ranger Josh: We went fishing for a lot of fish and there were some alligators, but we didn’t see any. We caught a lot of shrimp! More than all the other things we caught. My first shrimp I caught jumped right out of my hand and I don’t know where it went. Maybe it jumped back in the water, or in the bucket we put the other shrimps in. We went fishing with a net. 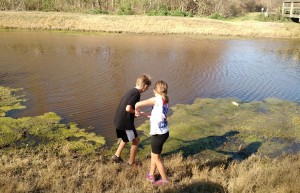