We were leaving southwestern Pennsylvania and on our way to West Virginia so Country Roads was definitely on my brain.  Right after leaving Ohiopyle and getting on the highway we saw several signs warning that dangerous mountains lie ahead.  The signs suggested that trucks pull over at the top of the mountain to do a safety check and study the map which showed runaway truck ramps.  I asked the Beast if she was ready to show Pennsylvania how Colorado drivers handle a mountain with 14,000 lbs dragging along behind…she purred along as if to say, “bring it on!”  It was a steep hill for sure but between that Allison transmission in low gear and the exhaust brakes we did just fine! 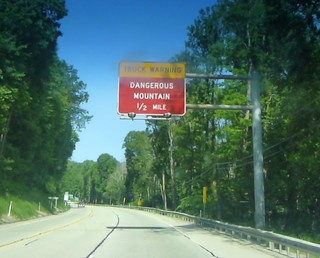