We’ve been doing some long travel days as we near the end of our time out on the road.  We’ve got a long way to go and a short time to get there…hey, that would make a good song lyric 😉  Since we like to stay in an area for 3 or 4 days we’re doing longer drive days and skipping some stuff in between.  Today’s drive was from Niagara to southwestern Pennsylvania to a state park called Ohiopyle.  Have you ever heard of it?  I sure hadn’t, but a friend of mine from PA gave it high marks.  We weren’t sure if it was pronounced o-HI-o-pile or o-hee-O-ple but we were heading there anyway.

There were toll roads getting us out of New York and through parts of PA but they were at least getting a little cheaper.  As we neared our final destination I thought I heard a strange screeching sound but then a truck passed us and the sound disappeared so I figured it was him.  But then I heard it again a little later.  I tried accelerating then coasting to see if it was engine related but I did not seem to have any control over it with the accelerator.  I braked lightly, still no change.  Then the sound would disappear.  It came and went a few times then Steph said, “is that us making that sound?”   I rolled down my window and the screeching sound was horrendous!! I figured a wheel bearing must have gone bad or something.

We weren’t really in a place we could pull over so I just drove slow. There was a traffic light up ahead that I finally stopped at.  I got Ava and the Beast to a complete stop….but the screeching continued.  What the???!!  The sound was not coming from us….it was from cicadas!  The volume of these buggers is absolutely insane…louder than a dump truck driving through a nitroglycerin plant.  As we continued driving on we realized that we would hear the sound when we were nearer to trees then it would fade away as it opened up for buildings and parking lots.

The road leading to the park was crazy steep and windy as it took us way back in the sticks.  We were not anywhere close to getting 4g internet.  One or 2 bars of 3g sometimes…but mostly nothing.  I started to worry that I wouldn’t be able to work out in these boonies.  But when we arrived at the campground, BOOM…3 bars of 4g!!

The park ranger said that a few days prior they could not tell what color the office building was because it was completely coated in cicadas.  She had also thought that they were doing road construction at her house only to realize it was the cicadas making all the racket.  I guess the cicadas are pretty thick right now in this part of the country.  Here is a news clip showing a family with a lot of them at their house.

We were able to get situated in a really nice spot in the campground and amazingly, the cicadas were not nearly as loud here as they were along the road.  This will be a nice spot to hang for a few days.  Oh, and its pronounced, o-HI-opile.  Its a local Indian word that means frothy water. 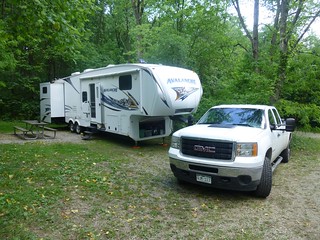 4 thoughts on “What’s that screeching sound?”