It was a perfect day for driving.  We were laying down the miles singing some songs together, reading together and laughing at each other’s jokes when I look in the mirror and see an epic display of sparks spraying from the trailer.  Parts start ripping off the side and leaving a trail of debris behind.  I’m putting everything I can into the brake and it won’t stop.  Then I woke up!!  That was the dream I had the night we moved from Phillie to NYC.  You see, Ava’s leg was broke.  Basically there is a threaded part that stripped out.  It still had a little bite but not much.  So there was nothing really to hold the leg in position….down or up.  So when hitched up the leg could just drop out to the ground and start dragging and that is exactly where my subconscience went in that dream.  How we made it from Philadelphia to NYC on those bumpy roads without that actually happening…well, had to be an angel holding the leg up the whole way.

Our time in NYC was up and with a long day ahead of us we wanted to get on the road by 10:00 which meant we should be hooked up by 9:30 and heading to the dump station.  And we were on track to do that but retracting Ava’s leg revealed an issue!  The exact issue I had dreamed about.   Fortunately, when we retracted the good leg Ava’s bad leg just continued to hang down like a sad broken leg should.  I got some cord and fashioned a sling for her and all this set us back about 30 minutes.

We thought by making our travel day Monday we’d avoid the chaos of all the campers leaving the campground on Sunday.  Apparently, we were not the only ones with this idea.  When we arrived at the dump station we were number 3 in line and number 4 joined just a few minutes afterwards.  I think we’ve only had to wait at a dump station maybe 5 times….and always we are number 2 (see what I did there?).  So we waited and waited and waited and waited.  Finally it was our turn and we moved into position.  Ava has a total of 4 tanks….2 each of grey and black.  I get out the hose, place the outlet end into the dump station, put my clear elbow on the inlet side and I go to release the pressure using the little port on the cap and more than just a little air came out!!  Well, it was then I realized a big boo boo I made back in Phillie!!  While dumping the tanks at our full hookup site there I had gotten distracted by Ava breaking her leg and I never shut the valve to the black tank.  So I now have 10s of gallons of black water sitting on the other side of the cap.  CRAP!!!!  Literally!!  I shut the black tank valve and was able to remove the cap part way and catch the sewage in my flexible hose.  You might poo poo my situation but it was not a load of fun.  There is a lot that I don’t do but sanitation  is one of the things I do do.  Ok, enough puns already.  Hopefully I learned my lesson.

The drive from Jersey City to Boston was LONG.  It was also expensive.  I’d mapped the route out ahead of time making sure to steer clear of the Holland and Lincoln tunnels due to our large size.  The George Washington bridge would accommodate us but the tolls were crazy expensive.  Well, somehow google ignored where I’d told it to go and ended up routing us over the GW bridge to the tune of $50.  Traffic was creeping along so we really got our money’s worth in time we spent on the expensive bridge.  We had 2 other tolls costing us a total of $75 for the day!!  Yipes!  We set a record on our trip for number of states traveled through in 1 day as we started in New Jersey and drove through New York, Connecticut, Rhode Island and ended up in Massachusetts.  Diesel got progressively more pricey as we went and I ended up paying a record high $2.80/gal (only did a few gallons) to get us enough to get to Boston.

The weather was fine for driving and we made it safe and sound to Wompatuk State Park in Hingham MA.  We got checked in, filled the fresh water tank up (only electric at the site), found our site and set up.  The park was beautiful and it felt good to be done driving for the day. 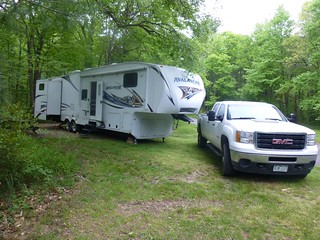