I did not have it on my mental itinerary to go to Gettysburg but Dacen wanted to go and we needed to buy a little time before some other reservations we have in a few days.  So we packed up home and headed for Pennsylvania.  Google took us a crazy, windy way that might have saved time for a passenger car but not for our big rig.  We finally arrived at the Caledonia State Park campground where we did not have reservations but there were 2 sites available on line that would fit our rig.  So we go in to the office to check in and get the most unfriendly welcome we have ever received.  It wasn’t that he was rude or anything…but I’m pretty sure he hated his job.  Anyway we got checked in and went on in to find our spot.  This site did not have water hookup so we had to fill up the fresh water tank at the community spigot and this is where we made mistake number 1.

It will be several days before we realize our mistake, so check back later for the post where we figure out what we did wrong.  We go to get in our spot and its plenty long and, while there is plenty of air space on either side, the painted lines we’re supposed to be between are not making Ava feel very petite.  But we thread the needle carefully placing power pedestal in the gap between two slides, get leveled up and start putting out the slides when Steph hollers for us to stop…mistake number 2.  Somehow, despite our careful placement, we were a bit too close to the power pedestal.  However with a little push on the pedestal we were able to clear it….whew.

We commence slides and just as the last slide finishes we hear a loud CLUNK.  I looked inside and everything seemed fine so we started setting up home.  I was doing outside stuff and noticed something wrong with the side of the camper by the slide that clunked.  I inspect it and find mistake number 3.  Our little flashlight which stays parked by the TV apparently escaped its storage spot during our Google sponsored scenic drive and ended up on the floor where it got caught by the slide.  So it was now wedged in the slide.  A little muscle was all that was needed to get it freed and we were all good to go.  Pretty minor mistakes but we’ve added a few more items to our check list so we do not make them again!

The slides were hanging over the lines for our spot and we totally dwarfed the little 8 foot pop up camper right next to us, but the campsite on the other side of us was empty the whole time we were there.  The campground had quite a few people in it from the weekend but many of them were packing up and leaving.

Once we settled in I took a walk by myself along the creek.  It was nice and sunny but with crisp air, just right for walking.  When I got back home the rest of the fam joined me for a stroll around the campground.  We stopped at the playground for quite awhile to play on the rare teeter totter!  I love just watching the kids play, however you need an even number of butts for teeter totters so I became the 4th kid sitting close to the pivot point to balance with their small bodies.  Of course, it turned into a little lesson on lever arms (mostly for Brielle). 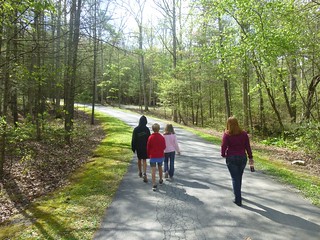 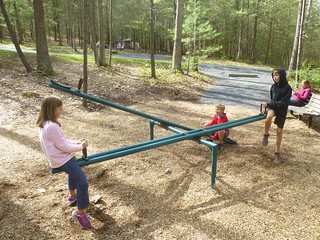 We had a nice dinner and finished up the night with a couple rounds of hearts where Caden cleaned up with a big fat ZERO (low is good in hearts)! We had Dove chocolates for dessert and I said everyone HAD to do whatever their wrapper said. I thought I had seen all varieties of messages but Dacen got a doozy…”Stay up past your bed time”. 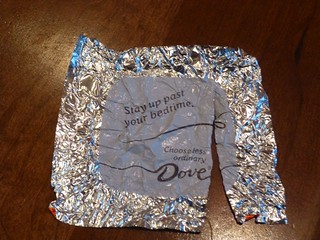 But that will have to be another night….full day planned at Gettysburg battlefield tomorrow.  I know, we’re party poopers.

2 thoughts on “Three mistakes in Caledonia”