The Kennedy Space Center was awesome! I had an amazing time! We saw a few people dressed up as astronauts but that wasn’t the cool part. There were at least ten rockets, one of which was huge and there was the shuttle Atlantis. We got to experience one of the best launch simulators which was really cool. After the simulator, to get back to the main building, you’d walk down a ramp and it had all of the shuttle missions, and their crew. We saw our friend Joe Tanner. He was on four shuttle missions and the funny thing was, on two signs it said Joe, and on the other two it said Joseph. There was a rocket garden with a bunch of the rockets from Mercury, Gemini, and Apollo missions. The enormous Saturn V was in another rocket hanging from the ceiling and man it was huge! We saw an IMAX movie about exploration and mostly the new SLS, Space Launch System, and the capsule, Orion. Its a brilliant design and idea, and the coolest thing is, I am the perfect age to ride that rocket to Mars in the future! In the Atlantis building of course there was the Atlantis, and the launch simulator with the spiral ramp, but there was a second level where it showed what Atlantis’ reentry was like. You would start running and go up on a little tilted ramp, and if you didn’t try hard enough, which the Atlantis couldn’t, you’d go back down onto another then do it again and again and again. Here’s a picture I drew: After that little bit we waited in a little line to go down a steep slide that leveled out at the end. When it was my turn I raced Dacen. that wasn’t the fun part though. It was so fast and it felt like one of the huge waterslides at Water World without the water. Easily one of my favorite parts was, well the entire Saturn V building. I loved seeing the size of The rocket, the little astronaut van, the vault with some moon stuff and a journal thing that looks a lot like my math notebook. As I told you, I liked the whole building. I also liked the huge Rockets that carried the shuttle to space. They weren’t as big as the Saturn V but they were still huge.

Here are some existing rockets. Saturn V is the tallest one with the Shuttle next to it. As you can see, there is a huge difference. Here’s me and the SRBs (solid rocket boosters) and ET (external tank) of Atlantis…I’m there at the base of the left booster. 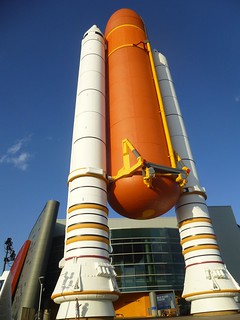 I must go, the future awaits me,

P.S. If you haven’t watched the movie The Martian, Its in redbox right now and its really cool and has a lot of the things that they’re working on right now, like Orion.