I’m gonna tell you all about the Keys. Gas is kind of expensive as well as a lot of other stuff. Next you can’t find a T-shirt on Key West that doesn’t say Key West. Also the water is very cool. I wish we’d gone snorkeling but we didn’t have gear. We went there when there were some clouds and wind but it was still fun.

We stayed at an expensive place but we got to go to a yacht club for free. It had a beach paradise and a pool that was just perfect. The showers were okay. When I was taking my shower back home I didn’t know that it was plumbed backwards and it turned out my pressure was the worst too, it was just a strong mist. So I ended up getting misted with cold water in a tiny dark compartment that somehow got classified as a “shower.” Yeah. That deserves quotations. Meanwhile Dacen had an awesome shower that was the opposite of mine and Papa had a pretty good one too. Mine should be called a rewohs and a lower class one at that. 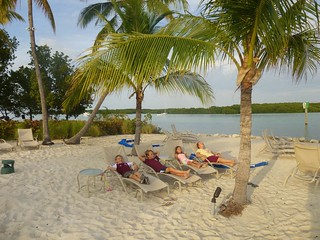 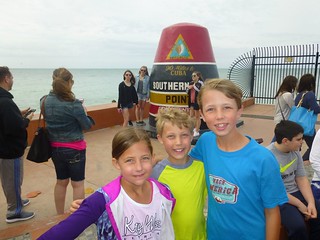 There was a fort which had a bunch of cannons, illegal winding stairs, and a ten-holer bathroom that used tidal flushing… I don’t really want to swim there despite the beautiful water.

We saw these four crazy people riding two motor scooters we saw them at a pizza place too. And the beach. And at Ava… Huh. That’s weird. We celebrated Brielle’s birthday with Hollis and Rae Hunt and Bill and Karen Miller. Karen kinda almost maybe coulda went into anaphylactic shock because she kind of touched a creature she had already been told not to touch by police and repeatedly by Rae. Karen: “Is it normal for me to stop breathing?” She didn’t really say that. They gave Brielle a dress (that obviously said Key West) and two princess coloring books that she was dying to color in until we got home. I liked spending time with the Millers and Hunts and our time in the keys was kinda cloudy, but great! 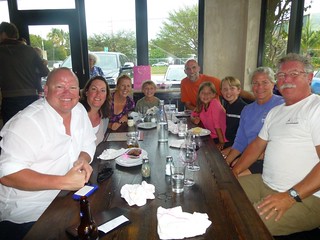 There were a ton of chickens running all over. Sadly they were protected and you get fined enormously if you hurt one. We saw a couple dozen chicks, and also some eggs in a nest at one spot.

That and the fact that the traffic on the bridges is horrible most of the time is all you need to know to have a great time in the keys. Oh yeah, and the Ice Cream in Mallory Square in some shops costs about half of getting into Disney World. (Maybe.) 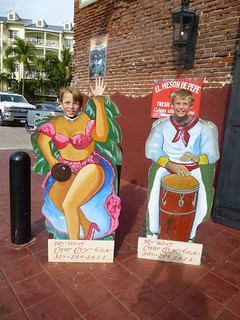